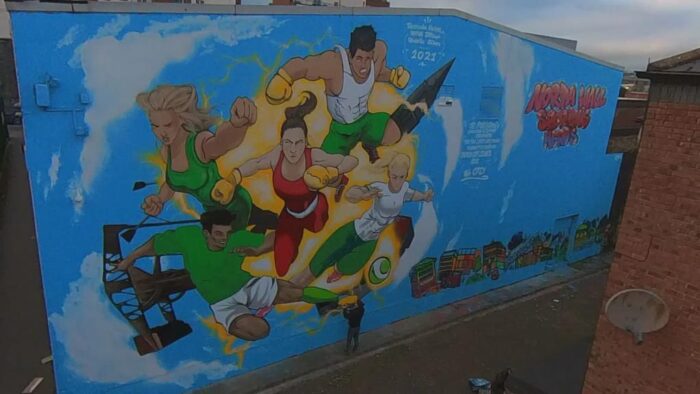 The eye-catcher. The tabloid seller. The attention-grabbing soundbyte, the load of auld s…

Sometimes it’s hidden, teased out in a play by Peter Sheridan.  And sometimes it’s so clear it jumps out and hits you right between the eyes, tackles you to the ground, forces you to look at life a different way.

Women with a plan, and now a gang. Inner city kids of all ages bursting with pride to be part of it all, grabbing brushes and paints under Fionnuala’s expert eye.

Proving that with a spraycan and some positive graffiti nothing can defeat ye.

Having the barefaced cheek to turn that plain brick wall at the back of Sheriff Youth Club into a canvas full of joyous yellows and zinging reds, as a green giant Kelly Harrington and her team of sporting superheroes leap out challenge you to challenge yourself.

Be proud, be positive, believe in family, in friends, in community.

Forget the preconceptions. Rewrite the rulebook! Retell the fairytale.

You know the good guys really do win? Sometimes those streets really are paved with gold.

Save, and savour the images today with Melinda Koday and her camera so we can relive them, and retell them, time after time until they become true.