The winners of the “Short Story Competition” have been announced! CONGRATULATIONS!

Well done and a big thank you to all the keen young writers that entered this competition. Over 100 young people from around the country sent their stories,  and the standard was extremely impressive.

The winning story was “Words” by Jonathan Walsh. Here are some words about the winner, from writer Tanya Farrelly  who judged this competition.

“In his winning story, ‘Words’ Jonathan Walsh succeeds not only in drawing the reader in, but in sweeping them along on the make-believe adventures of the story’s wheelchair bound protagonist. The unnamed boy finds not only solace but sheer joy and escape in his brother’s books. When he reads, he is transported to other places; he can become whatever and whoever he wants: he is a cowboy facing down his nemesis; he fights pirates on a wild and turbulent sea. Finally, he discovers that he can create his own stories and that in writing he can “experience anything, just by arranging [the words] in the right order.” Jonathan Walsh has certainly arranged his words in the right order in this story. It is highly imaginative, beautifully written and extremely visual. It is crafted with both skill and empathy – and I’m delighted to award it first prize in The Five Lamps Arts Festival Short Story competition 2021.”

The runners up were:

Third Prize: “What Goes around comes around” by Jack O’ Reilly 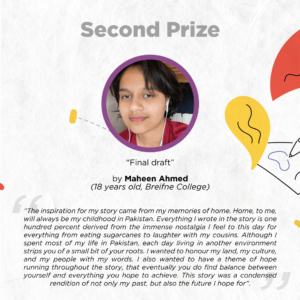 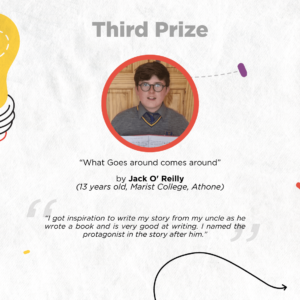